0
Is it Okay to Use Baby Talk?
06 September 2019
Cognitive
How Do Children Learn Language?
5 September, 2019 by BabySparks in Cognitive 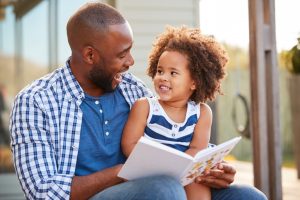 Are little ones born with a built-in ability to learn language? Or is language all about learning from others? These questions are part of the classic nature versus nurture debate, and plenty of researchers have argued about them for decades!

Let’s take a look at the three main theories of language development and what they mean for you.

The nativist theory suggests that we are born with a specific language-learning area in our brains. This area’s only responsibility, nativists say, is learning language. Nativists point to this “biological programming” to account for the fact that children around the world reach similar language milestones at similar ages.

Supporters of the nativist theory also believe that children are wired to understand basic rules of grammar, like combining nouns and verbs to form phrases.

Nativists believe that children will learn language no matter what, regardless of the environment they grow up in.

The behaviorist theory, on the other hand, suggests that language develops as a result of certain behaviors, such as imitating what they hear and responding to the feedback they get. When a baby says “up” and a parent lifts him up, for example, the meaning of the word “up” is reinforced. Or, a toddler calls a zebra a horse, and a caregiver corrects him: “No, that’s a zebra.”

For behaviorists language learning is all about a child’s direct experiences with his environment.

The interactionist theory says neither biology nor behavior alone shape language learning, but a combination of the two. Rather than one area of the brain being dedicated to language, interactionists believe that children use the same parts of their brain to learn language as they do to learn any other skill. Language learning, they say, is also heavily dependent on meaningful interactions with parents and caregivers that motivate children to understand and use language. Interactionists stress the value of joint attention, in which children and their parents are focused on the same thing while also interacting with each other.

What This Means for You

At BabySparks we are all about interaction! We built our entire program around research showing that meaningful back-and-forth with your little one shapes his brain and affects the trajectory of his entire life. We also rely on well-known studies, like this one, that show the value of parent-child interaction in language learning.

So, the takeaway is to not assume that your little one will naturally learn language no matter what. Instead, tune in to your child and offer thoughtful, rich language experiences. Want to learn more about how to do that? Head over to these articles: